Shock to the Heart

An Evening of Grand Guignol Theatre

Twelve years ago at Worldcon, GG Productions brought you the first round of giggles and shudders. GG Theatre was glad to be able to perform again at WorldCon 2006, LA Con IV. (Anaheim Convention Center, August 23-27, 2006.) 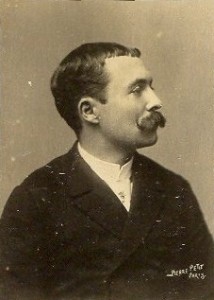 The term grand guignol (pronounced grahn ghee–nyull–really!) is associated with a type of theatre we would nowadays call shock. Its creator, veteran theatrical producer/director Oscar Méténier, meant it to épater le bourgeois–shock the middle classes (and the aristocrats, for that matter)–by delving into the seamy side of life, the underworld and its denizens. It took the reality theatre of playwrights like Ibsen and upped the ante: actually showing murder, mayhem, sexual acts (presumably simulated), and assorted other depravities–things that just were not shown onstage. It was all about breaking taboos–foul language, indecent exposure, and liminal settings (whorehouses, the ER, back rooms of shady organizations, the downstairs part of Upstairs Downstairs). Méténier’s Grand-Guignol theatre, converted from a Catholic chapel in 1896 (the building still stands; it’s now a film school) was the place these plays were first staged–but they also were performed at other theatres in Paris in the early to mid 20th century. The genres of plays were mixed: social / class satires, black comedy, racy farces. And horror–lots of it. The horror plays of the Grand-Guignol (which came to be its trademark) explored fears about science and technology, human jealousies and psychological obsessions, racism, exploitation, torture and mutilations, criminal activity and its payback. In its unrelenting focus on real-life murders, atrocious crimes (some plots came straight out of daily newspapers), and overtly sexual situations, grand guignol set the standard for the kind of “realism” we take for granted on TV and in film.

The four one-act plays we will be presenting range from “Love, American Style” risqué farces to much darker explorations of human behavior. They follow the standard grand guignol format of wildly varying the evening’s entertainment–following an intense drama with a frothy comedy (termed “hot and cold showers”). Of course, Méténier didn’t invent this pattern–it dates back at least as far as medieval theatre–but he did bring it once again into vogue. And the Théatre du Grand-Guignol was very much in vogue for 60+ years in Paris, making quite a name for itself in France as well as briefly taking by storm the theatres of London and New York. Today grand guignol is also reappearing in different contemporary re-creations around the U.S. (we are happy to say we were one of the first!). And we are proud to breathe once again our own spark of life into this venerable creation, its visage forever fixed in a gay rictus.

Powered by WordPress and WordPress Theme created with Artisteer by Curt Steindler.